The China Study, cliff notes with a little opinion

The China Study can easily be summarized in one sentence: The more plant based foods you eat, the healthier you'll be. Reading this book made an immediate impact on my food choices - it just made sense and science backs it. For the past two years I have followed the China Study Diet of eating plant based foods for 90% of my caloric intake and I'll never go back. The allergies that I suffered with for 35 years have disappeared, my energy levels have increased and my hair and nails are stronger. I feel confident that I am following the best possible diet for my overall health and disease prevention - plus it's a great way to stay skinny! The transition to a plant based diet was not difficult and the 10% animal based protein allowance makes it very doable. I hope this summary will peak your interest enough to read the whole book - each page is full of valuable, life changing information. Don't be fooled by the boring title, it will be one of the most important books you ever read! 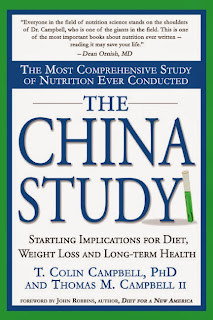 In the early 1970s, the premier of China was dying of cancer and wanted to learn more about this misunderstood disease. He initiated a massive survey to determine the death rates for twelve different kinds of cancer in more than 2,400 Chinese counties and 880 million (96% of population) citizens. 650,000 people worked on this project - I can't even imagine the logistics involved and this was before computers!! 87% of the Chinese population is of the same ethnic group, the Han people, so they have similar genetic backgrounds and are perfect for comparison. The results showed that certain types of cancers were high in parts of the country and in other parts they were almost nonexistent. Cancer rates were dependent on where in China they lived and were not genetically based. The data from this "cancer atlas" would be used a few years later to make statistical correlations in what became the China-Oxford-Cornell Diet and Health Project, aka "the China Study."

The author, Dr. T. Colin Campbell has a seriously impressive resume. He has received more than 70 grant years of peer-reviewed research (the majority from the National Institute of Health) and has authored more than 300 research papers. Campbell grew up on a dairy farm believing in the great health value of animal protein in the American diet. He trained at Cornell and MIT in nutrition, biochemistry and toxicology and spent 10 years on the faculty of Virginia Tech's Department of Biochemistry and Nutrition. He then returned to the Division of Nutritional Sciences at Cornell in 1975 where he currently holds his Endowed Chair (now Emeritus). Campbell set out in his career to investigate how to produce more and better animal protein, which we considered to be "the cornerstone of good nutrition."

While at Virginia Tech he assisted on a project in the Philippines working with malnourished children. They were investigating the unusually high prevalence of liver cancer in Filipino children, which is usually an adult disease. Aflatoxin is a mold toxin found in peanuts and corn and was thought to be the root of the problem - it is one of the most potent carcinogens ever discovered. The US Agency for International Development funded the project and they focused on making sure these children got as much protein as possible, especially from animal-based foods. The results were not what they expected and Campbell was shocked to discover that the children who ate the highest-protein diets where the ones most likely to get liver cancer (which were the children of the wealthiest families). This went against everything he had ever been taught and Campbell initiated additional studies to try to understand these crazy results.

In one particular study with rats he was able to show that with a diet of 20% casein (a protein in milk) rats developed carcinogenic tumors. Switching the rats to a plant based diet resulted in a decrease in tumor growth. Switching back to the casein diet brought a renewed tumor growth. He concluded that animal based foods increased tumors while plant based foods decreased tumor development. The implications of controlling tumor development with diet were huge!

Dr. Campbell needed to determine if the results from the experimental rat study also applied to humans - could they control cancer growth with diet in people also? He joined with researcher Dr. Junshi Chen and embarked on the most comprehensive study of nutrition in history. They gathered blood work on 6,500 adults from 65 different counties in China to gather data on 367 variables. They measured everything the families ate over a three day period and analyzed food samples from markets across the country.  The 65 counties in rural areas were carefully selected because they wanted to find people who mostly lived and ate food in the same area for most of their lives. Using the data from the Premier's survey they had more than 8,000 statistically significant associations between lifestyle, diet and the disease variables they selected. The New York Times called it "the Grand Prix of epidemiology."

The people of rural China eat a mostly plant based diet and do not have access to dairy or meat - only 9-10% of their total calories come from protein and only 10% of the protein comes from animal based foods. Compare that to the typical American diet which consists of 15-16% total calories from protein with 80% from animal based foods. The majority of Americans eat this way, but there are major differences between diets in rural China and developed China. The developed, industrialized parts of China eat more Americanized diets because they have access to meat and dairy.

This is where the book gets REAL interesting to me.... different diets = different diseases according to Campbell's research. He was able to cross link the mortality rates from the Premier's study combined with his blood work research to determine that there are two separate disease groups: diseases of poverty, which are typically found in rural agricultural areas and diseases of affluences found in more economically developed areas.

Diseases of Affluence (Nutritional Extravagance):
Diseases of Poverty (Nutritional inadequacy and poor sanitation)
People living in rural China do not have access to proper medical care to treat diseases which are usually not fatal outside of third world nations, so they die of "diseases of poverty." Campbell determined that as a developing population accumulates wealth their eating habits and lifestyles change and sanitation systems improve. People begin shifting away from a plant-based diet toward eating more meat and dairy, which they did not previously have access to. This change of diet results in people dying of diseases of affluence rather than the "poor" diseases of poverty. Campbell states "As soon as they start putting small amounts of animal food in their diet, basically blood cholesterol levels...start to go up...cancer starts to emerge, heart disease starts to appear." People living in rural China rarely die of diseases of affluence. Cancer, diabetes and coronary heart disease are almost nonexistent. In many cases, the differences were extremely large. For example, in one part of China where people eat more meat, the rate of esophageal cancer for men is 435 times greater than the rate for men in the rural areas that eat a plant-based diet. In one county that had high meat consumption the breast cancer rate was twenty times greater than the counties that ate a plant-based diet.

Campbell's research further indicts dairy products showing they are linked to Type 1 diabetes, and breast, prostate and colorectal cancers. The countries with the lowest consumption of dairy products have significantly lower incidences of these diseases. He states "There is enough evidence now that doctors should be discussing the option of pursuing dietary change as a potential path to cancer prevention and treatment. There is enough evidence now that local breast cancer alliances, and prostate cancer institutions should be discussing the possibility of providing information to Americans everywhere on how a whole foods, plant-based diet may be incredibly effective anti-cancer medicine."

In The China Study's "Good Nutrition Guide", Campbell offers advice on how to transition to a healthy plant-based diet. "Eat a whole foods, plant-based diet, while minimizing the consumption of refined foods, added salt and added fats. Eliminate all animal-based products, but don't obsess over it. If a dish contains a small amount of meat, the quantity very likely will be nutritionally unimportant. Benefits were shown to increase as meat consumption decreased, even when the percentage declined from 10% to 0%." He emphasizes his "Eight Principles of Food and Health": 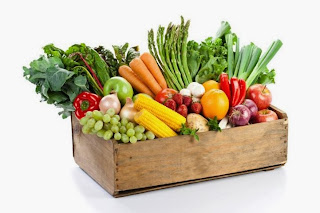 A plant-based diet can also help protect you against diabetes, obesity, autoimmune diseases, bone, kidney, eye and brain diseases. The animal protein you ate in your past can be forgotten, all the damage can be reversed by switching to a diet of fruits, veggies and grains (which is a relief because I ate a LOT of bacon back in the day!).


The book concludes with a very frustrating chapter showing how government, science, medicine, business and the media have concentrated on profits over health. Together they attempt to destroy viewpoints that challenge the status quo. The food industry claim questionable nutritional benefits and lobby hard against labels warning of health concerns. Our government continues to fail us as they support special interest that push dairy, meat, refined sugar and fat into our cupboards - in the meantime America's health continues to decline as the population gets fatter and sicker.  Campbell was almost expelled from a committee of scientists because he dared to suggest a link between diet and cancer. He states "In the world of nutrition and health, scientists are not free to pursue their research wherever it leads. Coming to the 'wrong conclusions,' even through first-rate science, can damage your career." Big medicine is also a problem. The medical industry does not focus nearly enough on the role that poor nutrition plays in the prevalence of chronic disease despite research. Medical school training includes one 3 hour course on nutrition and the majority of doctors rely on nutritionists to be the experts on the subject. Campbell sites the work of Drs. Caldwell Esselstyn and John McDougall who have both had successful results in treating patients through nutrition. President Bill Clinton is a patient of Dr. Esselstyn and has completely reversed his heart disease by switching to a plant-based diet (remember how he used to chow down on McDonald's?!). Both men have experienced rejection from the medical establishment that is so focused on surgery and drugs. Nutrition should be the standard of care for treatment of chronic diseases - nature made it best.

Campbell's finding prove to me that diet is our best weapon against sickness and disease. America is in a severe health crisis and the mainstream way of eating clearly isn't working. Our children's generation is the first in US history expected to live shorter lives than their parents. According to Jeffrey Levi, Executive director of The Trust for American Health (TFAH) if current rates of obesity, cancer, Type 2 diabetes and heart disease continue, our children's average life span is thought to be only 75 which is 5 to 11 years lost. To quote Campbell in conclusion "These issues all come down to three things: breakfast, lunch and dinner." 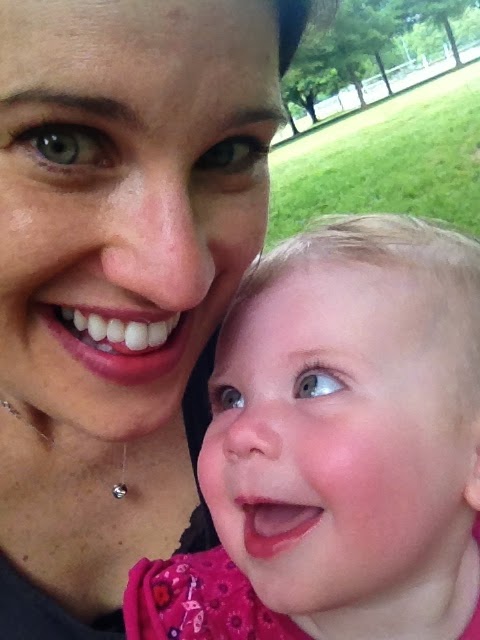